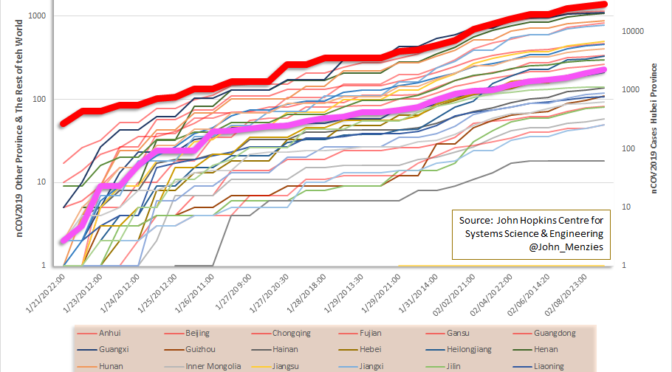 While the Novel Corona Virus (nCOV2019) remains a serious global infection, the media continues to report on nCOV2019 with remarkable ignorance. The common journalistic refrain is now citing increasing numbers of cases with alarm claiming that the infection is accelerating. Based on the reported number of cases, for the moment, little could be further from reality. The reported rate of increase in cases has dropped significantly. With the extended Chinese New Year (CNY) holiday now coming to an end, transmission rates may well now increase as travel resumes. The progression of the disease both inside and outside of China looks remarkably similar excepting in Hubei where it had likely spread well before a new highly infectious virus was recognized. In Hubei the initial reported death rate was high, likely reflecting poor early reporting and a medical system inundated with a large number of cases requiring intensive care.

The disease progression for the reported data for all the Chinese provinces and the Rest of the World is shown in the graphic above. The similarity in the slope of disease progression suggests that the data is internally consistent and that commonly discussed under-reporting may not be occurring. The straight-line trends on the log scale simply reflects the logarithmic nature of disease progression for a disease with Ro>1. The chaotic trends at the beginning of the record likely reflects delayed reporting and possibly increased presentation of cases as the public became more aware of the severity of the disease after the 21st January.

The chart below of the distribution of nCOV2019 cases shows that the majority of cases are reporting in Hebei and supports the decision by the Chinese Government to lockdown not only Wuhan but the entire province.

As would be expected the distribution of mortalities is predominantly in Hubei province.

The aggregate mortality rate is shown in the chart below (note the inverted Y-axis). After an initial surge in deaths (which may reflect delayed reporting) in Hubei province the mortality rate has stabilised at 2%, however this average hides some interesting details.

The Mortality Rate varies significantly by region. Mortality in Hubei province was the highest at nearly 3%. This likely reflects the rapid progression of the disease before the appearance of nCOV2019 was recognized and before enough resources could be mobilized. The data also suggests that provinces with better resourced medical facilities were better able to manage patient care. An example of this would be Guangdong compared with Gansu. Guangdong reported more than 10 times the cases of Gansu, however Guangdong reported a mortality rate of 0.9% compared with that of Gansu at 2.4%. There are a number of other comparable comparisons in the data all reflecting likely difference in medical infrastructure.

The mortality data for the rest of the world indicates a death rate of less than 1%. While this data still reflects the earliest days in the disease progression, a number of conclusions can be drawn. nCOV2019 is highly contagious resulting in both viral pneumonia and secondary bacterial pneumonia. A high proportion of patients require hospitalization and oxygen therapy at least for several days. This places considerable strain on these facilities and available oxygen supplies. Were a pandemic to evolve outside China and medical facilities were overwhelmed then comparable mortality to Hubei could be anticipated.

With the end of the CNY and the resumption of travel in china it would seem likely that case numbers may well increase significantly. It is however also likely that many people will stay away from the workplace and remain in the provinces and many businesses many simply close for some time, moderating the impact.

Controlling nCOV2019 both within China and outside will be very challenging, particulalry in countries with poor medical infrastructure. It would seem reasonable that in parts of SE Asia and in Africa nCOV2019 there is a high probability that nCOV2019 will reach pandemic levels. It is also possible that nCOV2019 may be with us for some time, presenting as an annual epidemic until there is sufficient immunity with the global community.

While various experts have commented that surgical masks offer no protection, I would suggest that they are highly effective in keeping hands away from faces, which is likely the main form of transmission. In addition, prudent and regular hand washing should be encouraged and governments should prepare for nCOV2019 by adequately resourcing medical services. It should be remembered that SARS and MERS are both more contagious and more deadly but were successfully contained.