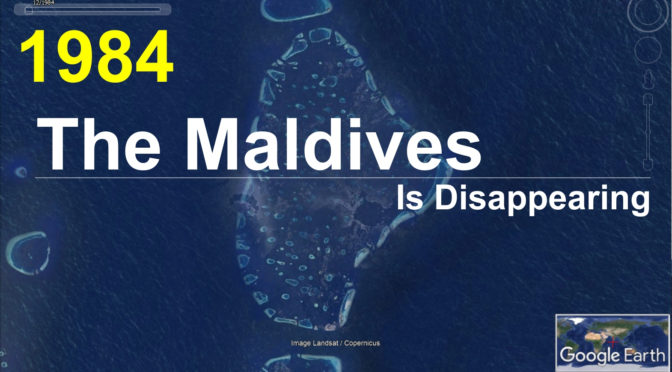 Over the last 20 years at least there have been near continuous press reports of the near-term disappearance of the Maldives, a series of coral atolls in the Indian Ocean. The chain of 26 atolls stretches from Ihavandhippolhu Atoll in the north to Addu Atoll in the south with an aggregate landmass of about 298 square kilometres (115 sq mi). It is one of the world’s most geographically dispersed sovereign states as well as the smallest Asian country by land area and population, with around 520,000 inhabitants. Malé is the capital and the most populated city, traditionally called the “King’s Island” for its central location.

The alarmist media claims that human induced global warming, resulting from carbon dioxide emissions is to blame for the imminent inundation.

If there is a crisis in the Maldives with the 500,000 about to soon become climate refugees, then it should be evident in the Google Earth imagery. We have compiled the satellite imagery for the Kin Island for every year from 1984 to 2016. You can determine if the Maldives is disappearing.

It can readily be seen in the tide gauge data for Mumbai in India and Fremantle in Western Australia that Indian Ocean sea levels have been rising steadily since record keeping began in the 1800s. There is no evidence in this data (the longest records in the Indian Ocean) that sea levels of recent times are rising catastrophically or have any relationship with atmospheric carbon dioxide concentrations.

There is a risk of inundation in the Maldives however it is due to the natural rise of sea level and has nothing to do with human activity and no amount of expenditure will halt this rise in sea level.  The Maldives should build to accommodate future sea level rise, rather than blame carbon dioxide emissions and seek rent from western countries.

Media reports would indicate that investors remain keen to invest with numerous new airports and resorts under construction.