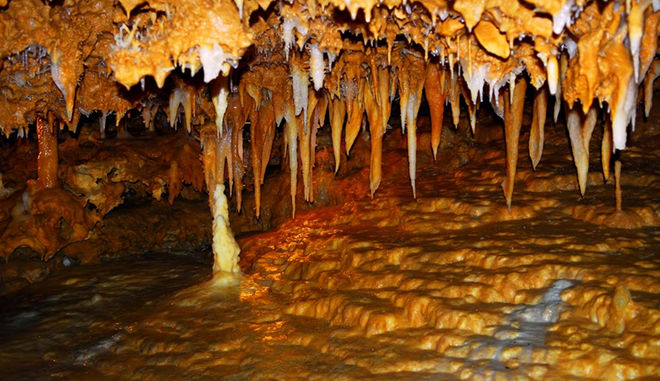 Interesting research published in Nature communications comments on the global warming pause, the Little Ice Age impacts in the Pacific and the over simplicity of climate models.  The stalagmites used in this study (LR06-B1 and LR06-B3) were collected from Liang Luar, an ~1.7-km-long cave situated on the east Indonesian island of Flores (8° 32’N, 120° 26’E; 550m above sea level.  They used U/Th dating, 18O and 13C isotope profiles, trace element analysis, principle component analysis and GCMs to conclude that:

Importantly, in this data there is clear evidence that the dry period evident around the turn of the last millennium coincides with the approximate timing of the Medieval Climate Anomaly ~950–1250 CE seen in Europe.    The Little Ice Age event (widely thought to have been a largely European event) can be seen in this data with a ~400-year reduction in AISM rainfall recovering in strength at around 1300, and by 1500 is above average –  coincident with the Little Ice Age. Maximum rainfall in Flores at ~1600 CE, amongst the wettest periods of the past 2,000 years, is synchronous (within dating uncertainty) with peak cooling in the Northern Hemisphere and maximum ice discharge in the North Atlantic.  This is solid evidence for the global nature of the MCA and LIA.

Interdecadal modes of tropical Pacific ocean-atmosphere circulation have a strong influence on global temperature, yet the extent to which these phenomena influence global climate on multi century timescales is still poorly known. Here we present a 2,000-year, multiproxy reconstruction of western Pacific hydroclimate from two speleothem records for southeastern Indonesia. The composite record shows pronounced shifts in monsoon rainfall that are antiphased with precipitation records for East Asia and the central-eastern equatorial Pacific. These meridional and zonal patterns are best explained by a poleward expansion of the Australasian Intertropical Convergence Zone and weakening of the Pacific Walker circulation (PWC) between ~1000 and 1500 CE Conversely, an equatorward contraction of the Intertropical Convergence Zone and strengthened PWC occurred between ~1500 and 1900 CE. Our findings, together with climate model simulations, highlight the likelihood that century-scale variations in tropical Pacific climate modes can significantly modulate radiatively forced shifts in global temperature.