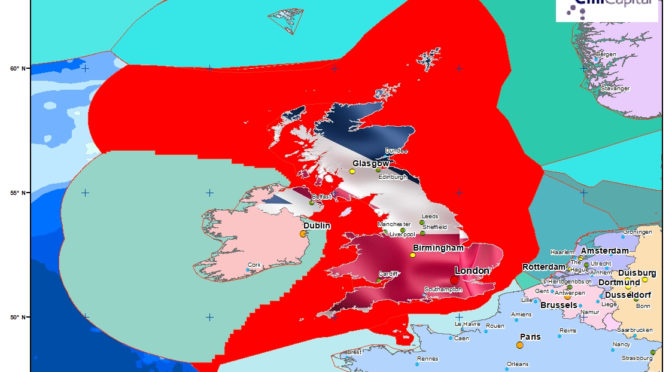 The United Kingdom has a land area of 242,500 km2. In addition to this, is has a much larger, 731,300km2 Exclusive Economic Zone (EEZ), to which it surrendered rights to the European Union upon joining that body.

The map below shows the considerable and dominant EEZ in Europe in red.

An exclusive economic zone (EEZ) is a sea zone prescribed by the 1982 United Nations Convention on the Law of the Sea over which a state has special rights regarding the exploration and use of marine resources, including energy production from water and wind. It stretches from the baseline out to 200 nautical miles (nmi) from its coast. The term does not include either the territorial sea or the continental shelf beyond the 200 nmi limit. The difference between the territorial sea and the exclusive economic zone is that the first confers full sovereignty over the waters, whereas the second is merely a “sovereign right” which refers to the coastal state’s rights below the surface of the sea.

As an independent coastal state under the UN Convention on the Law of the Sea, the United Kingdom will be required to manage the living resources and fishing activities within its Exclusive Economic Zone in a sustainable way. Consequently, it will be for the UK Government, and the Devolved Administrations, to develop and implement a domestic fisheries policy after withdrawal from the EU. In declaring an Exclusive Economic Zone independent from EU waters, the UK would be able to control the access that foreign vessels have to fishing in UK waters. It will be for the Government of the day to decide whether the principle of equal access should be preserved, and the extent to which foreign vessels should be granted access to fishing in the UK EEZ.

The issues are relatively complex as several continental European countries have economic interests in the fisheries that lie within Britain’s EEZ. Britain could elect to continue to allow access or could deny it which could see a return to the Cod Wars of last century when there was frequent conflict between British and Icelandic fishermen in the Atlantic.

The Cod Wars were a national humiliation in the period 1958-1976, will it happen again?

Alternatively and more likely, as an interim move Britain could modify the quota system under the Common Fisheries Policy to the greater benefit of British coastal communities.

Reversion of its rights following BREXIT will be a hard fought battle but one worth fighting as it will allow for rapid expansion of the domestic fishing industry, decimated by Brussels and revitalize coastal communities which have supported BREXIT.