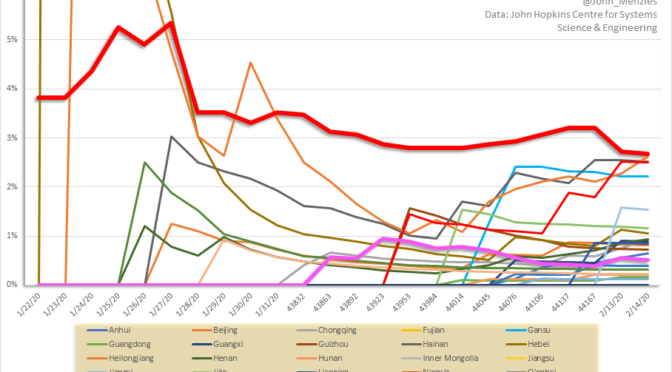 With the aggregation of clinically diagnosed infections now included in the case total there was a significant 48% jump in cases over the last few days. Most of the difference was with the inclusion of the large number of cases tentatively diagnosed as “Unconfirmed” based on symptoms and CT scans (i.e. clinically diagnosed as against a lab RT-PCR test). These Unconfirmed cases were previously being reported as such on the Chinese Government website.

The total of reported cases now stands at 67,000 with 1,523 deaths for an aggregate death rate of 2.3%. While the WHO/John Hopkins data reported herein does not include a breakdown of demographics of the victims, limited reporting in the medical literature suggests that few children have been severely impacted by COVID19, however a high proportion of pregnant patients suffered negative impacts on their pregnancies including death. In addition there are reports that patients with hypertension or diabetes and smokers suffer more severe illness.

The chart above shows the distribution of cases for each of the Chinese provinces and for the Rest of the World. While the totals differ the slope of the individual data on this semi-log plot are all very similar.

While the aggregate mortality has changed very little over the last 20 days of the epidemic as the charts below show, a number of provinces are seeing their death rates converge on that of the epicentre of the disease, Hubei Province, at around 2.5%. While this trend would appear reasonable it may also reflect the relatively low number of cases in those provinces.

The waterfall chart below clearly shows that the vast number of cases are within Hubei Province.

While it is reasonable to conclude that the medical facilities in Hubei were initially overwhelmed by the outbreak and the initial high reported mortality may reflect that, there would appear to be no relationship between the number of cases or the mortality rate based upon the provincial medical capacity, measured by physicians per 100,000 of population.

The Chinese based on the reported data have performed heroically to contain the COVID19 outbreak, significantly out-performing our “optimistic” model of disease progression. The next 10 days will determine if the infection can be contained following the return to work after the extended Chinese New Year holiday. The model assumed improving case identification and treatment and increasingly the effective use of anti-virals. Community health initiatives have been far more effective than we had modelled.

While there has been much criticism of and suspicion that the number of cases and deaths were under-reported the data would appear to be internally consistent and death rates sufficiently variable to suggest that in large part the Chinese are reporting reasonably accurate numbers.