Morgan Stanley report today that they expect lithium carbonate prices to drop from the current level of US$ 13,375/t to US$ 7,030/t by 2020.  This is far lower than the consensus view after lithium prices surged 100% in the last 2 years.

Substantial supply increases are driving their forecast, with Morgan Stanley reporting that the largest producers in Chile are planning on adding 500,000 tonnes per year in new mine supply by 2025.  This supply would swamp the anticipated growth in demand from battery production.  Indeed Morgan Stanley predict that the lithium market will go into surplus in 2019… and stay there.

The firm has downgraded two of the largest producers, Albemarle Corporation (NYSE: ALB) and Sociedad Quimica y Minera S.A. (SQM: NYSE SQM)  which are planning to bring an additional 200,000 tonnes of lithium on stream by 2025.  This will cement the position of Chile as the largest global producer with a  >30% share.

Most of the lithium hopefuls listed on western stock-exchanges have used lithium carbonate prices in the range of US$11,000 and 13,500/t in economic studies and the majority of these projects would struggle if prices were to tumble.  Given the rush to lithium of recent times and the nature of commodity markets we suspect that Morgan Stanley are likely correct.  Even a dramatic increase in market penetration for electric cars (which now seems increasingly unlikely given the growing trend away from government subsidies) would do little to change the supply demand dynamic in the coming few years unless the fall in price is sufficiently steep as to stop or delay some of the larger projects now being contemplated.  Now that is always a possibility.

An exception may be spodumene producers like Pilbara Minerals Limited (ASX: PLS) which showed a >50% return on investment in a planned expansion at a spodumene price of US$550/t, a 60% discount to the current spot.

Canadian law firm Fasken Martineau DuMoulin LLP has released its as always engaging review of proxy contests in Canada during 2017.

A proxy fight is an unfriendly contest for the control of in this case, a public listed company.  Proxy fights usually occur when shareholders become unhappy with management’s behaviour (corporate governance) or where economic outcomes are disappointing and generally involve disputes over directorships and management positions.

The disaffected group, sometimes a corporate activist, will solicit the proxies of shareholders via a proxy solicitation.  A proxy allows for an individual or institution to become the shareholders authorised representative.

Incumbent directors and management have a number of distinct advantages over the disaffected shareholder group.  They have access to the corporate treasury and can use it in a largely unrestricted manner, they can hire very expensive proxy solicitation firms, can engage in disparaging public relations campaigns though their existing public relations and shareholder list channels and lastly they can rely on the corporations law requirements to easily disqualify entire actions or individual proxies.  Boards can simply ignore the actions of disaffected groups who then must rely on the courts to seek remedy.

I have been involved in a number of proxy battles.  I have initiated and managed two and actively participated in a  third, all of which were  resounding successes for the dissidents.  A proxy fight should not be considered lightly,  it can be very public, is time-consuming and expensive and outcomes can be uncertain.

The number of proxy fights is about the same for the last three years, 2015-2017 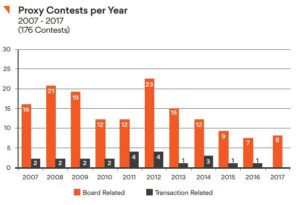 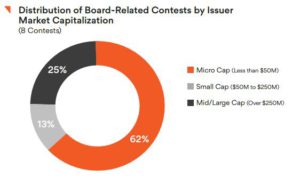 Unlike 2016, when management dominated and largely lost,  institutional investors dominated the proxy contests in Canada during 2017 and won 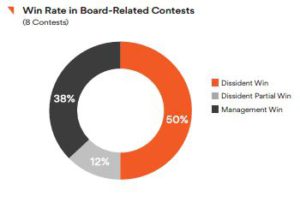 If you get the opportunity attend the Fasken lectures at their offices in Toronto during the 2018 PDAC.   They were most informative in 2017.  Contact them here.

Why am I always getting the Blame.  I had nothing to do with the lack of posts on this Blog I was far too busy with gathering fat-rich nuts, defending my territory and finding a mate before the winter.  Nope nothing to do with me.

A vexing little corruption that took the good people at Urban Design in Phonm Penh a day to resolve.  I strongly recommend Urban Design Studio for innovative and unique graphic and website designs.  From simple (!) logo design, to entire branding campaigns and website development, this team is exceptionally professional and cost competitive.

You can contact Urban Design Here.  Ask for Mark Lind or Sreychen Sok.

Now that we are back online –  its time to publish some materials.  There are a few projects that are evolving including a study of the relationship between CFCs and ozone, an analysis of the reported Fukushima radiation levels and releases and much more.