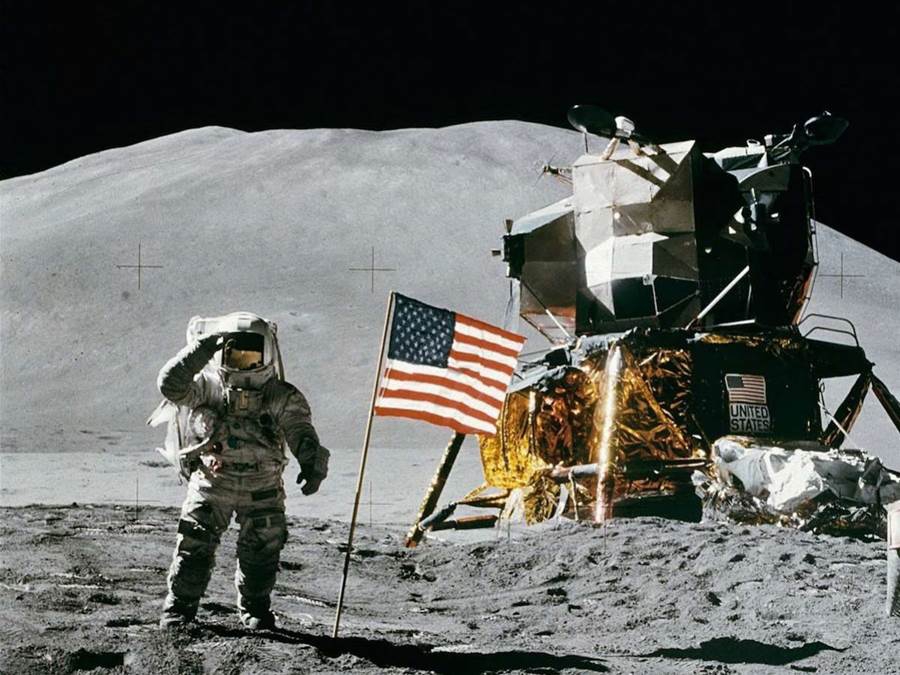 Neil Armstrong on the Moon, July 1969: NASA/JPLOn this day 49 years ago , Apollo 11 landed the first two people on the Moon, mission commander Neil Armstrong and pilot Buzz Aldrin.  Our first step into the cosmos?  There are 14,000 stars within 100 light years of Earth, where will we be in 10,000 years?

To put this event into perspective some of the historic documents merit review and provide some understanding of the challenges and the technology of the time.

Reports from the Research Steering Committee on Manned Spaceflight, Space Sciences board etc for the period 1959 through 1971.  From the NASA Historical archives

“The United States will launch a three-man spacecraft toward the Moon on July 16 with the goal of landing two astronaut-explorers on the lunar surface 4 days later.

If the mission –called Apollo 11–is successful, man will accomplish his long-term dream of walking on another celestial body.”

“The purpose of the Apollo 11 mission was to land men on the lunar surface and to return them safely to earth. The crew were Neil A. Arm¬strong, Commander; Michael Collins, Command Module Pilot; and Edwin E. Aldrin, Jr., Lunar Module Pilot.

The space vehicle was launched from Kennedy Space Center, Florida, at 8:32:00 a.m., e.s.t., July 16, 1969. The activities during earth orbit checkout, translunar injection, transposition and docking, spacecraft ejection, and translunar coast were similar to those of Apollo 10. Only one midcourse correction, performed at about 27 hours elapsed time, was required during trans lunar coast.

The spacecraft was inserted into lunar orbit at about 76 hours, and the circularization maneuver was performed two revolutions later. Initial checkout of lunar module systems was satisfactory, and after a planned rest period, the Commander and Lunar Module Pilot entered the lunar module to prepare for descent.

The two spacecraft were undocked at about 100 hours, followed by separation of the command and service modules from the lunar module. Descent orbit insertion was performed at approximately 101-l/2 hours, and powered descent to the lunar surface began about 1 hour later. Operation of the guidance and descent propulsion systems was nominal. The lunar module was maneuvered manually approximately 1100 feet downrange from the nominal landing point during the final 2-1/2 minutes of descent. The spacecraft landed in the Sea of Tranquillity at 102:45:40. The landing coordinates were 0 degrees 41 minutes 15 seconds north latitude and 23 degrees 26 minutes east longitude referenced to lunar map ORB-II-6(100), first edition, December 1967. During the first 2 hours on the surface, the two crewmen performed a postlanding checkout of all lunar module systems. Afterwards, they ate their first meal on the moon and elected to perform the surface operations earlier than planned.

Considerable time was deliberately devoted to checkout and donning of the back-mounted portable life support and oxygen purge systems. The Commander egressed through the forward hatch and deployed an equipment module in the descent stage. A camera in this module provided live television coverage of the Commander descending the ladder to the surface, with first contact made at 109:24:15 (9:56:15 p.m. e.s.t., July 20, 1969). The Lunar Module Pilot egressed soon thereafter, and both crewmen used the initial period on the surface to become acclimated to the reduced gravity and unfamiliar surface conditions. A contingency sample was taken from the surface, and the television camera was deployed so that most of the lunar module was included in its view field. The crew activated the scientific experiments, which included a solar wind detector, a passive seismometer, and a laser retro-reflector. The Lunar Module Pilot evaluated his ability to operate and move about, and was able to translate rapidly and with confidence. Forty-seven pounds of lunar surface material were collected to be returned for analysis. The surface exploration was concluded in the allotted time of 2-l/2 hours, and the crew reentered the lunar module at lll-l/2 hours.

Ascent preparation was conducted efficiently, and the ascent stage lifted off the surface at 124-l/4 hours. A nominal firing of the ascent engine placed the vehicle into a 45- by 9-mile orbit. After a rendezvous sequence similar to that of Apollo 10, the two spacecraft were docked at 128 hours. Following transfer of the crew, the ascent stage was jettisoned, and the command and service modules were prepared for trans earth injection.

The return flight started with a 150-second firing of the service propulsion engine during the 31st lunar revolution at 135-l/2 hours. As in trans lunar flight, only one midcourse correction was required, and passive thermal control was exercised for most of trans earth coast. Inclement weather necessitated moving the landing point 215 miles downrange. The entry phase was normal, and the command module landed in the Pacific Ocean at 19 5-l/4 hours. The landing coordinates, as determined from the onboard computer, were 13 degrees 19 minutes north latitude and 169 de-grees 09 minutes west longitude.

After landing, the crew donned biological isolation garments. They were then retrieved by helicopter and taken to the primary recovery ship, USS Hornet. The crew and lunar material samples were placed in the Mobile Quarantine Facility for transport to the Lunar Receiving Laboratory in Houston. The command module was taken aboard the Hornet about 3 hours after landing.

With the completion of Apollo 11, the national objective of landing men on the moon and returning them safely to earth before the end of the decade had been accomplished.”